I have to apologize to my fellow Poetry Friday-family members…I read almost no one’s posts over the weekend because I was just so busy. And when I say “busy,” let me explain…

Here in our town we were celebrating our annual Fall Foliage Festival, which is a huge event. We may have barely 3000 residents, but downtown swells to thousands and thousands more each year on Columbus Day Weekend. Amusement rides, artists and craftspeople, oxen pulls, tons of delicious food, pancake breakfasts, and a road race are all part of the festivities, as well as a book signing I attended at the local indie bookstore Sunday afternoon, after I finished walking in the parade with my daughter. (We also helped our church celebrate its 200th birthday AND found time to go to a bonfire Sat. night…whew!) But the Friday afternoon event that kicked it all off this year was:

When Eagle Scout Alex Swanson decided to earn a badge for community service, he thought creating a story walk along the newly-opened rail trail in town was a good idea. So he contacted the local rail trail organization and our local library to see what could be done…and pretty soon, the project was off and running!

This past Friday, Alex, rail trail reps, and library volunteers put the finishing touches on 21 podiums featuring chronological spreads of my picture book, positioned from the library lawn down the street to the rail trail, which then continue into the woods along the rail, ending just 20 feet away from one of the state’s few remaining wooden covered bridges.

Yes, this is New Hampshire at its finest!

I was so honored that they used Flashlight Night as the inaugural picture book; granted, I live in town, but they could have still chosen any book they wanted, yet they chose mine.

I was also stunned (as were the organizers) by how many folks showed up for the grand opening of the story walk at 5pm on Friday. We had advertised it around the area, yet had no idea what kind of crowd we should expect; we hoped for at least a few families.

As it turned out, over 50 individuals – kids, parents, grandparents, neighbors – attended the grand opening, and none of us could have been happier!

After each of us said a few words, I led the group down the path to each station. I would read the appropriate passage from the book, then allow members of the group time to look over each spread.

Some folks had never heard of a story walk, so we wanted everyone to understand what Alex and the rest of us were doing, and to enjoy it as much as possible.

Oh, and as a nice little added touch, the rail trail crew offered flashlights to each family, so they could see the book spreads in the darkness of the shade. (After all, by 5:30pm, the sun is starting to say so long)

By the way, Alex is still attempting to cover his costs of putting this together, so if you’re interested in helping him out by donating a few bucks to the cause, I’m sure he’d appreciate it. In fact, he has a GoFundMe page available for donations. 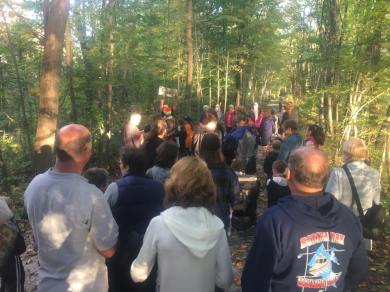 It was surreal, I’ll tell you that. I know of several “flashlight night” events around the country, but when an author gets to be a part of one in this way, it’s quite humbling. And by the way, if you’d like to either create a story walk or host a flashlight night in your area, please don’t hesitate to email me at the address at the above-right, and I can get you in touch with the folks who organized this!

My book will be available for viewing for about 3 months or so, and then another book will take its place. Here’s to many more flashlight nights…with many other stories!

You can purchase personalized signed copies of Flashlight Night, (Boyds Mills Press, 2017), Don’t Ask a Dinosaur (Pow! Kids Books, 2018), and nearly ALL of the books or anthologies I’ve been part of!

Just click the cover of whichever book you want and send the good folks at MainStreet BookEnds in Warner, NH a note requesting the signature and to whom I should make it out to. (alternatively, you can log onto my website and do the same thing) They’ll contact me, I’ll stop by and sign it for you, and then they’ll ship it. Try doing that with those big online booksellers! (Plus, you’ll be helping to support local book-selling – and wouldn’t that make you feel good?)

Thank you to everyone for your support!

Did you like this post? Find something interesting elsewhere in this blog? I really won’t mind at all if you feel compelled to share it with your friends and followers!

To keep abreast of all my posts, please consider subscribing via the links up there on the right!  (I usually only post once or twice a week – usually Tues. and Fri. – so you won’t be inundated with emails every day)
.
Also feel free to visit my voiceover website HERE, and you can also follow me via Twitter , Facebook, Pinterest, and SoundCloud!

15 thoughts on “A flashlight night for “Flashlight Night!””

This site uses Akismet to reduce spam. Learn how your comment data is processed.