In honour of National Poetry Month, I’m planning on featuring poetry in all of my April blog posts (each Tue. and Fri.).  I’ll be spotlighting a different poem of mine each friday for Poetry Friday, as I always do, but each Tuesday I’ll also have some poetry news or information to share.

I had some fun plans for today. I was going to offer some ideas about how you can get kids involved in enjoying and creating poetry, involving books and cookies and magazines and scissors…but all that will have to wait.

Butts succumbed to his battle with cancer on Easter Sunday at the age of 68.

He spent most of his life in the northeast, living in New York for years, organizing poetry readings and open mics, before moving to Boston, Mass. and then eventually to NH, where he was most recently professor of English at Hesser College.  He also taught a low-residency Creative Writing Program at Goddard College in Vermont.

Butts was a prolific poet, publishing eleven books and chapbooks.  The most recent is Cathedral of Nervous Horses, a collection of new and collected poems from previous books, which was published last September by Hobblebush Books of Milford, NH. His poems were also featured in numerous independent literary journals, as well, like The Atlanta Review, The Saranac Review, and The Fourth River.

Of life and death, family and friends

Butts drew inspiration from his memories growing up in the small town of Le Roy, New York:  the deaths of his parents, the questionable friends he hung out with, and the gritty yet beautiful scenes of a working-class community all figure prominently in his work. Take, for instance, his recounting of the loss of three family members and the touching honesty with which he tells the story, in “Inheritence,” from The Required Dance (Igneus Press, 1990). After noting that he was only eight years old when his uncle died and nine when the family dog was buried…he jumps ahead ten years and recalls the sight of his father lying on the floor, too weak to get up. It was at this point, he tells us, he was truly afraid:

I watched him at the hospital,
his frail body curled
like a fetus, and realized
he was going back, and I wanted
to take hold of those shrunken hands
and lead him there myself.

But like he so often did, he did not dwell on the negatives of the difficulties associated with these sad moments; instead, he would look for a positive way to continue on. In this case, after describing the emotional pain and turmoil his mother went through dealing with his father’s death, he concludes the poem with the realization that, “I understood, I was now the man she loved.” 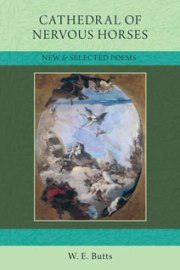 Upon receiving the poet laureate nomination almost exactly 4 years ago, Butts said, “I really believe that poetry, in many, many ways, is the literary form that we
have that is closest to expressing the human condition, the human spirit.” (New Hampshire State Council on the Arts, March, 2009)

I encourage you to pick up a copy of Cathedral.  While some of the poems are new, most are from previously-published collections, so it is a great introduction to Butts’ work.  His term as our state’s poet laureate was to continue until 2014; there has been no word on whether someone will be chosen to fill the vacancy.

On a happier note, because it is National Poetry Month, I’m pleased to be participating in Irene Latham’s 2013 ‘Progressive Poem’ at Live Your Poem – a poem that started with one blogger April 1 and will travel from blog to blog each day, with each blogger adding a new line to the poem.

(By the end of the month, we’ll have a completed poem!)

Today’s tagged poet is Joy Acey – and I’ll be adding the third line to the poem tomorrow, April 3 – so please check back, and follow along with all the bloggers!

I have to thank David L. Harrison for this posting.  Last week in his blog, he posted a new poem (you can read it here) which reminded me of one I had written a few years ago about the same subject.  It got me thinking about how and why we view things the way we do…

A group of one hundred people could all witness the same thing simultaneously – a tree, a sunset, a rock, a catastrophe – and each one would see it, feel it, and remember it differently (I’ve written a number of poems about this concept, actually).  A perfect example of this is to take a classroom of children outside to view something mundane like the lawn or the sky – nothing too exciting or stimulating – then bring them inside and ask them to write down one word that describes what they saw.  You’ll get very different answers because each child views life through their own thoughts, interests, and personalities.  We all do.

That’s what’s so great about poetry!

One person can look at a leaf caught in a spiderweb and think stand-up comedy (like David did) while another can look at the same thing and think death (hence, the title of MY poem).

So here it is; it’s a bit more prosaic than most of my poetry, but I wanted to relate the experience as a story as much as a poem.  There’s a distinct narrative I wanted to get across, and even though I wrote it for adults, I wanted younger readers who may happen upon it to be able to understand the gist of what I was saying.

This was published last autumn in the Licking River Review, and now, a year later, with fall fast approaching, I suppose it’s the perfect time to ‘resurrect’ it.  Hope you like it!  And if you want to see more Poetry Friday posts, you can find the complete roundup at Random Noodling!

On its gentle descent to the grave,
a lone maple leaf
found itself
suddenly suspended,
ensnared
in a spiderweb.

Caught halfway
between life and death
it hung,
contemplating
a tenuous existence.

Not wanting to complete
the journey
downward,
the leaf was satisfied
to accept this fate.

Better,
it thought,
than the alternative –
dirt
and rain
and thick-treaded soles.

But as the days grew shorter
the weeks grew long;
and the leaf
dry and brittle with age
watched
longingly
as friends and family passed.

Unexpectedly
a burst of wind
loosed the grasp of the web;
the leaf
now free to fall,
eagerly
descended in anticipation
and finally
happily
found rest.

Writing the World for Kids

"I like nonsense, it wakes up the brain cells." — Dr. Seuss