This past weekend, my wife, my son, and I attended my wife’s family’s annual 4th of July cookout.  It’s amazing the things you learn and discover when you’re not constantly up each other’s arses on Facebook and Twitter. 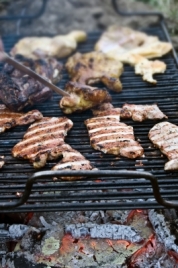 Before I go any further, I should explain something. This is a BIG shindig. Family, extended family, and friends all get together to hang out, have fun, and eat tons of food. I’ve been to more than a few family functions in the past, but this has got to be the biggest one each year.

This year, they even rented a Porta-potty!

Like I said…it’s a big party. Which is why I found it so surprising – and refreshing, really – to be able to learn so much from my own family members.

While many of the folks in attendance keep up with each other via social media, several don’t. And the ones who do – Yours Truly, included – are not living every moment of our lives to find out what everyone else is doing everyday.

Now and then I’ll see a Facebook post from someone, and perhaps I’ll comment, perhaps not. Often I miss a good deal of what’s going on because, to be honest, I’ve got a lot going on in my own life.

Not to sound selfish or anything, but I’m so preoccupied with my voiceover business, my writing, taking care of my 3-year-old son, taking care of the house/gardening/firewood/landscaping/etc., and trying to be a good husband to my pregnant, ready-to-pop-any-day-now wife…I honestly

don’t have the time to notice that my step-cousin Susie has posted another duck-lip selfpic or that Uncle Fred finally had his bunions removed.

So being able to enjoy true socializing was like a gift. I was able to relax

and chat with one or two people, snack on some food, and have a drink, then start another conversation with someone else and have some more food.  (Food figures prominently at this soirée – and in my life, for that matter)

And by engaging in real, old-fashioned human interaction, without the distractions that come with socializing online, I was not only more focused on what people were talking about, I was also able to enjoy it much more. I wasn’t being interrupted by pop-up ads, I wasn’t checking emails and bank accounts while trying to skim through my Facebook news feed, and I wasn’t finding intriguing news stories that pulled my attention away from my work.

I discovered quite a bit, too.

I learned that my uncle-in-law (not sure if that’s a real designation, but we’ll go with it) purchased and rebuilt a classic motorcycle which he turned into a trike. However, he left the rear wheel of the motorcycle on – meaning the trike actually has three wheels in the back. Which, I suppose, makes it a quad. Kinda, sort of.

I had a chance to catch up with a second cousin who recently graduated college, who told me a 7-year-old boy she was babysitting tried to hit on her. Not hit her…hit on her.  At 7 years old, all I wanted was a new Tonka truck. Apparently they start young, these days.

I also learned that another relative has started a new job that has tremendous perks; that the rules of horseshoes need to be altered slightly if you want the game to end before sunrise; and that Jello shots pack significantly more punch when they’re made entirely with vodka and no water whatsoever.

Oh, and all that cutting, splitting, and stacking cordwood I’ve been doing is paying off, it seems. While standing in my swimming trunks chatting with my wife and her sisters, one of them asked if I had lost weight. I said I didn’t know; it was possible, with all the outdoor work I’ve been doing.

I thanked her, of course – then immediately began to wonder what type of home improvement project is best for one’s abs.

Could I have learned these things via Facebook or Twitter? Sure – at least some of them. Although my uncle isn’t online, Jello shots are hard to do on Google+, and since I don’t post shirtless photos of myself on Facebook, I doubt anyone would have ever noticed my muscular, chiseled, near-godlike physique.

But having the opportunity to slow down and leave the electronic distractions behind was not only enjoyable, it was necessary. Hopefully you can find the time to slow down and catch up with the people close to you this summer.

Just like the batteries in our devices need to get turned off and recharged now and then, we need that, as well. That’s why, although I’ll be working through this week doing my voiceover work and writing my children’s poetry, I’ll be on a semi-hiatus, so to speak.

I’ll be spending more time readying the nursery for baby #2’s arrival in August and spending more time with my wife over the weekend – just the two of us, with no distractions. I also will not be posting a new blog entry next Monday.

I do have the urge to go out and cut down more trees, though.

Did you like this post? Find anything interesting somewhere in this blog? Want to keep abreast of my posts?  Then please consider subscribing via the links up there on the right! (I usually only post twice a week – on Tue. and Fri. – so you won’t be inundated with emails every day!)  Feel free to visit my voiceover website HERE, and you can also follow me via Twitter or Facebook.

8 thoughts on “Slowing down and catching up”

This site uses Akismet to reduce spam. Learn how your comment data is processed.